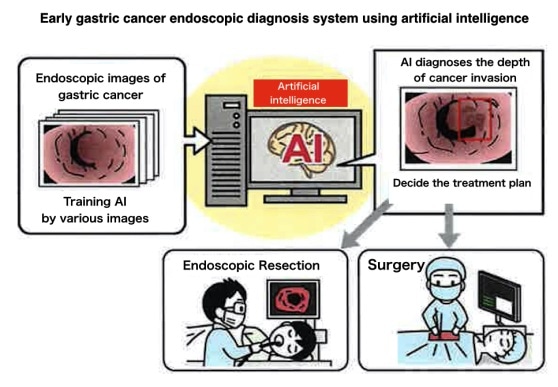 According to data released in 2017 by Japan’s Ministry of Health, Labor, gastric cancer ranks third in cancer deaths in Japan: second in men and fourth in women.

Treatment of early-stage gastric cancer includes endoscopic surgery (ESD), which can save the stomach, and surgical procedures that require gastrectomy.

However, although advances in endoscopic treatment technology has led to the early detection of gastric cancer, decisions on whether to use endoscopy treatment or surgery mainly depend on how deep the cancer has invaded the stomach wall. Furthermore, these decisions are made by careful examination of endoscopic images by experienced physicians. At present, there are many cases where endoscopic treatment is performed first where surgery would have been more appropriate and vice versa.

With this background, Professor Yoshiro Kawahara of the Graduate School of Medical and Dental Sciences, Okayama University, and colleagues have developed artificial intelligence (AI)-based endoscope for early detection of gastric cancer. These research results were presented at the 97th Congress of the Japan Gastroenterological Endoscopy Society (JGES), May 31 – June 2, 2019, Tokyo.

First the prototype of the system to obtain the depth of early gastric cancer was constructed with GoogLeNet to match purpose (metastatic learning) by using the image recognition ability of CNN (Convolutional Neural Network) published by Google on numerical analysis software MATLAB.

Next, the researchers used the ResNet, which is a 152-layer convolutional neural network, to conduct intramucosal endoscopic resection among patients treated for early gastric cancer at Okayama University Hospital.

In addition, the correct diagnosis rate for deep-seated diagnosis of early gastric cancer as a combination of intramucosal cancer and submucosal invasion cancer was 72.8% in image units and 76.5% in case units.

Implications of the research

At present, gastroenterological endoscope medical diagnosis and treatment is based on experienced practicing physicians examining images.

As a result, the diagnostic ability of individual doctors varies, and with increases in the number of medical services in the future, there is concern about the possibility of oversight of cancer and increases in misdiagnosis. If automatic diagnosis of digestive tract endoscope images by AI is realized, then ‘automated diagnosis logic’ will be added to endoscope technology for real time diagnosis.

Automatic diagnosis will be possible and it will greatly improve the current status of relying on the diagnostic ability of individual endoscopy physicians.